The clay pits: a haunting history 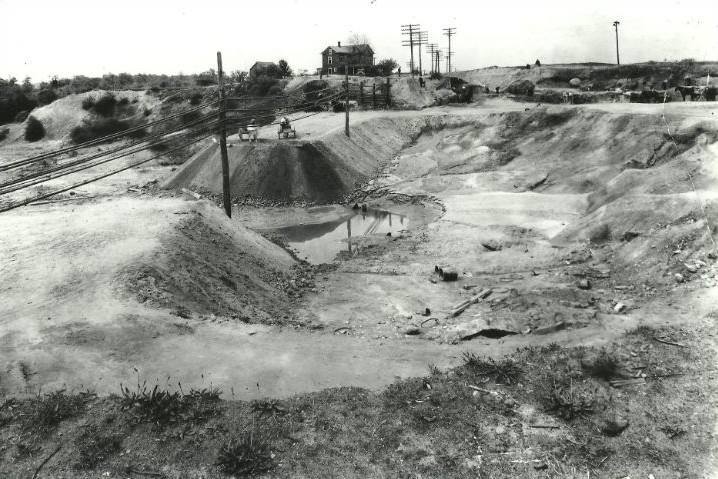 photo via the Historical Society of Woodbridge Township with permission

The Metuchen Ave Clay pits are now where Woodbridge Mall stands. It was near the Maple Hill Dairy Farm which no longer exists.

Woodbridge is a town located in central New Jersey. It’s been bustling since 1669, the year it was founded. Given that long history, there have been several spine-chilling stories swirling around the township about the clay pits through the years.
The clay pits
Woodbridge was once known for its clay and brick production in the 1800s and early 1900s. There actually used to be clay pits where Woodbridge Center Mall currently stands. Wooded areas surrounded those clay pits. Near present-day Metuchen Avenue in this area, lived a family in a small shack. They were known as squatters. The family had two sons who were believed to be in-bred. Another rumor that went around was that the family were descendants of Hessian mercenaries who served in the Revolutionary War. Children who lived in the area were instructed to avoid this family and their supposedly vicious dogs.
Strange findings
Eventually, the shack was torn down during the construction of Woodbridge Center Mall. Over 100 small wooden figurines were found in the family’s shack in the clay pits. They are anatomically correct and naked. They range in size from two to eleven inches. All of them have holes in their heads that are plugged with corks. The identity of who exactly made the figurines are unknown. The reason as to why they were made is unknown as well. However, Roger Ricco who is an expert on the restoration of tribal art added some input. He believes the figurines to be similar to primitive African power objects that have a special meaning or power to them. Others believe the figurines to be fertility objects due to the holes put in the heads of the dolls.

The figurines have recently been in the collection Gael and Michael Mendelsohn in Westchester, New York. In 2016 they were in a new-age art exhibit in Paris.
A religious aspect
Also located near the Woodbridge clay pits was a church. It was on a hill off current day Karkus Avenue. The church was built in the 1930s or 1940s. It didn’t have a specific religion and was known for miracles. It had pews and wasn’t painted with little décor. John O’Connor is a former member of the Woodbridge Historical Society. He mentioned how he remembers people saying the church was a “healing place” where one would go to be cured of their ailments.

Woodbridge resident Sophie Bader recalls an instance in which she witnessed one of these miracles at the church. She was seven years old and was eating popcorn at a local circus that came to town. Somehow, a popcorn kernel got into her eye, causing her pain. Her father had heard of the strange church and its reputation of miracles happening there. He brought her to the church at once. Sophie reluctantly didn’t lose her eyesight and the irritation was healed.

The mystery of the Woodbridge clay pits and what occurred around them is a strange mystery that may not ever be solved. But who knew that so much spooky history took place in our little town?