To stand or not to stand behind the Pledge of Allegiance 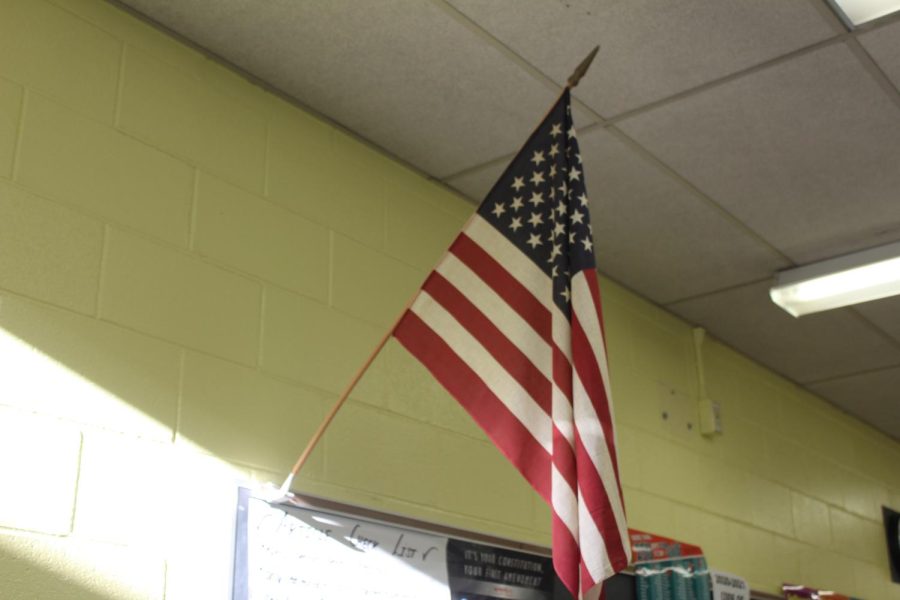 For many, a country's flags can provide hope in time of distress, reminding people that the country will persevere.

American kids stand–hand on heart–and recite the Pledge of Allegiance in tradition. Recently, there is rise in students questioning whether they should stand due to the continuing oppression that faces the African American community.
Where the Pledge of Allegiance Comes From
The Pledge of Allegiance is a brief American ceremony where one recites: “I pledge allegiance to the flag of the United States of America, and to the republic for which it stands, one nation under God, indivisible, with liberty and justice for all.” In proper American flag manner, you must put your hand on your heart, looking at the flag while standing up.

The first draft of the pledge was introduced by the now archived magazine The Youth’s Companion as part of the 1892 Columbus Day celebration for schools across the country written by Francis Bellamy. A flag being a part of the classroom décor in American schools started between 1888 and 1892 which lead to the creation of a formal flag salute.  On June 22, 1942, Congress formally recognized the Pledge of Allegiance into the federal Flag Code. “Under God” was added in 1954 by Congress and President Dwight D. Eisenhower.
Start of Allegiance Controversy
The first controversy with the Pledge of Allegiance happened in the 30s because of the “under God” part of the pledge. Then, West Virginia mandated reciting the Pledge and saluting of the flag.  Jehovah’s Witnesses objected on religious grounds. Originally the Supreme Court upheld West Virginia’s law but its was overturned in 1943 in West Virginia State Board of Education v. Barnette. In this case the courts ruled that “schools may not coerce or force students into reciting the Pledge, observing the existence of an individual right of conscience to sit silently while others recited.” Therefore, most schools made reciting the Pledge voluntary.
Start of Flag Protests
Society began questioning this 0ver-hundred-year-old tradition again in the 2000s.  In 2016, Colin Kaepernick, former NFL quarterback for the San Francisco 49ers, began kneeling during the national anthem to protest against police brutality. The athlete/activist is now on the black list by the NFL.

After a game in August 26, 2020 against the Green Bay Packers, Kaepernick told NFLMedia, “I am not going to stand up to show pride in a flag for a country that oppresses Black people and people of color. To me, this is bigger than football and it would be selfish on my part to look the other way. There are bodies in the street and people getting paid leave and getting away with murder.”

Today, NFL players continue to kneel before every game inspired by Karpernick. The protest has evolved to teams remaining in locker rooms during the national anthem. Thedenverchannel lists teams and players who have taken part in the protest.
Summarized History of Police Brutality in America
Police brutality is over aggression and violence of police officers. The United States has a history of this towards Black Americans. According to Cochranfirm, between 1910 and 1920, 3% of the Chicago population were Black, yet 21% of murder victims by the police were Black Americans.

During the 1950s to 1960s the agenda of the Civil Rights Movement were not only the abolishment of Jim Crow Laws. Among this list was confrontation of police brutality. Still, peaceful protesters were met with armed officers. They made use of dogs and power hoses to get rid of crowds.

In America, the use of home recordings like camcorders in 1991 were on the rise. The infamous video of the beating of Rodney King was able to reach wider audiences. Four officers beat King with batons causing 11 broken bones at the base of his skull, a fractured cheekbone, and a broken leg. Along with the injuries, he was in holding at Los Angeles County jail for three days.

Now, video footage helps to bring light to police brutality.
Debate in Schools
Tiana, a junior at Colonia High said she formed her opinion in her sophomore year during COVID-19 pandemic’s lockdown. The lockdown had seen another rise in thousands more black lives lost in the hands of police officers.

Alongside George Floyd’s murder in was Breonna Taylor, David McAtee, Rayshard Brooks, and many more. Cbsnews lists the deaths of 164 black lives taken by police officers in the first eight months of 2020.

However, some students say sitting for the pledge is disrespectful to the military.

Mrs. Mercado, a teacher in Colonia High, said she stands for pledge for those who have fought, still fight, and died for the United States.

For years, teachers at Colonia High School would ask students to stop in the halls when the Pledge came on the loud speaker. “Out of force of habit, I recently asked a group of students who were still in the hallway after the bell to stop moving for the Pledge of Allegiance. One student kept walking and totally disregarded what I said. It was in that moment that I realized this older protocol needed to be revamped,” explained Mrs. Danielle Allen, English teacher.
The Pledge and the Military
Although the pledge does not have a direct association with the military, the flag does.

The National Anthem, the Star-Spangled Banner, defines how Americans see the flag. It’s most famous lines are, “Whose broad stripes and bright stars, Through the perilous fight, Over the ramparts we watched, Were so gallantly streaming, And the rockets’ red glare, The bombs bursting in air, Gave proof through the night, That our flag was still there, O say, does that star-spangled banner yet wave, Over the land of the free and the home of the brave.”

In response to students sitting down others have argued that people have died for the flag in reference to the veterans.

The American flag is a symbol of patriotism and a sign used for hope. The 13 red and white stripes that represent the original colonies and the 50 stars which represent the state union. The color red represents valor, white is purity and innocence and the blue means vigilance, perseverance, and justice.