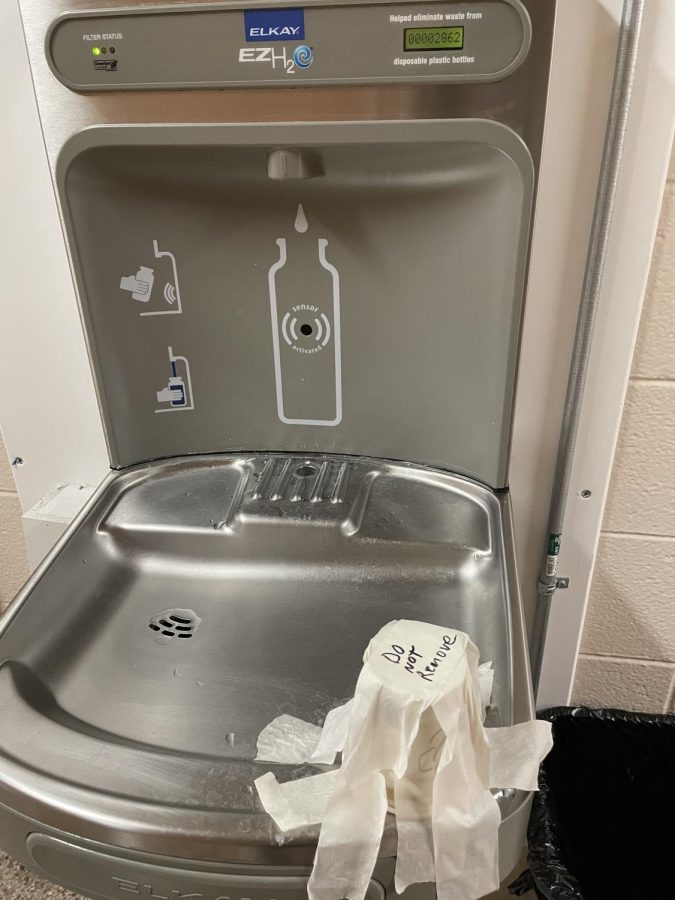 Due to elevated chemicals in the water, water fountains in Colonia High no longer have access to the spout.

Middlesex Water Company in New Jersey notified citizens living in Carteret, Edison, Clark, Metuchen, South Plainfield, and Woodbridge that their water higher levels of the chemical perfluorooctanoic acid. This substance affects the Park Avenue Treatment Plant in South Plainfield, New Jersey. In effect, mayors of these towns have hired a law firm to investigate as toxic waters stream through Middlesex County’s pipes.
What is PFOA?
Perfluorooctanoic Acid (PFOA) is a manufactured chemical and byproduct that produces in fluoropolymers. These coatings resist heat, oil, stains, grease, and water. PFOA is in bodies of water and in a variety of land and water animals. Manufacturers used PFOA in polytetrafluoroethylene, however, since 2002 a new process has been created that does not require this chemical.

Society is most likely to face exposure to PFOA by drinking contaminated water sources. The human effects from exposure to low environmental levels of PFOA are unknown according to the CDC. Although, this chemical can remain in the human body for a long period of time.

CDC studies show “laboratory animals given large amounts of PFOA can affect growth and development, reproduction, and injure the liver. Furthermore, more research can help scientists assess the human health effects of exposure to PFOA.”
The Notification
In their letter, the Middlesex Water Company addressed consumers in four towns that detect PFOA in groundwater samples. In addition, the amount has exceeded the State Department of Environmental Protection’s (DEP) maximum contaminant level standard.  Last year the State DEP created a maximum contaminant level standard for PFOA in drinking water at 14 parts per trillion. Previously, the state guideline was at 40 parts per trillion. PFOA is a carcinogen that possibly links to thyroid disease, accelerated puberty, liver damage, and changes to the immune system. The Middlesex Water Company states that the contamination is going to continue until the installation of new treatment equipment. However, this $47 million upgrade project is not going to be put into action until mid-2023.

Boiling the water does not eradicate the PFOA in the water either. Home water filters can decrease the contaminants but won’t eliminate them.

According to the Middlesex Water Company’s letter, “Design of a new treatment plant which will remove additional compounds, including PFOA, was completed and is under construction. The new treatment plant is expected to be in service in 2023.” This means this situation will not be remedied until 2023. How many bottles of water will these towns go through in this year and a half?
Schools with toxic waters
While living in one of these contaminated towns, schools have the responsibility to make sure students are aware of its dangers. Colonia High School has put cups on water fountains indicating that students should not drink from them. However, the water fountains used for filling up reusable water bottles remain open. While this seems appropriate, the water comes from the same pump and the filter does not get rid of the PFOA either.

Principal Mr. Pace stated that Colonia High School has not been instructed by the township or state to change any protocols in reference to the water issue. Superintendent Dr. Massimino is aware and waiting on directions from the township and state.

Furthermore, Colonia High School has yet to issue a letter home to parents and/or encourage them to send their children with bottled water. Many students rely on these water fountains and can’t afford the ones in the vending machines. Depending on the water brand, it costs between $1.50-$2.35 for one bottle. This price is outrageous and adds up over time. In effect, many feel schools should supply students with water rather than milk for lunch. This would not only prevent students from consuming PFOA, but it provides those who are tight on money to drink clean water. There are many students in the district who only have access to tap water at home.

Pace also noted that water bottles can be filled at certain fountains because they have a filter. However, Middlesex Water Company states that filters do not work to rid the PFOA from the water.

Something else to be considered is the use of water by the new food service company Pomptonian when cooking. Since the PFOAs don’t boil out of the water, students may be consuming PFOAs unknowingly.

Schools in these areas need to be more assertive and considerate towards this issue and look to find ways to accommodate their students. The upgrade project is far from near, therefore while toxic waters stream throughout Middlesex County, schools should be providing bottled waters to their students for the sake of their health.