2014 packed with lots of trends 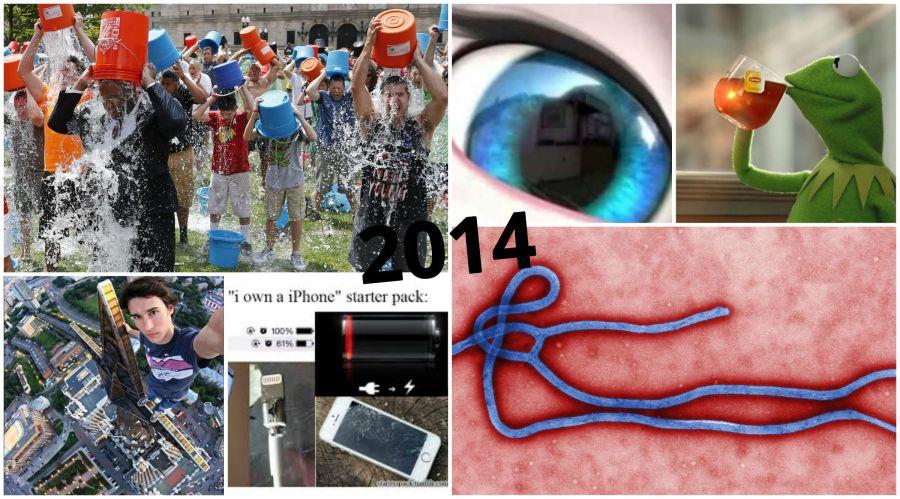 A look back on what made 2014 memorable. From ice bucket challenges to ebola, there was a lot of trending in 2014.

2014, a year of shovels, Kermit the Frog and starter packs on Twitter. Of course the year started off with the funniest, most original joke ever told, “I haven’t showered in a year.” While most people were celebrating the start of the new year, twitter was buzzing with pictures and memes of this sarcastic saying.

After that craze the trends continued with The Selfie Olympics. Unlike most selfies these were outrageous. The timeline on twitter would be filled with crazy pictures of people posing in ridiculous ways. Twitter was overwhelmed with selfies, and as social networking got more popular new trends took over. Talking Angela, an app that showed Angela, a cartoon cat who hangs out in a Parisian cafe. As the app grew so did suspicion; people believed that behind the pretty cat were actual people who began asking for personal information. Some believed the creepy app was real and ordered for kids to delete it. The app was reported it to the police. Others didn’t think much of it and just didn’t take any chances.

As things died down twitter became more and more relatable. Twitter pages were made specifically for teens, even for certain grades. Food, sleeping, liking of  celebrities, everything was becoming more personal and relatable to teenagers. The popularity of vine also got bigger; after twitter allowed vines to be posted, the comedic side of twitter came out.

While complaining about going to school and the annoyance of allergies came into play so did the popularity of a specific vine. The vine starts out with a fight between 2 girls, and when you don’t expect it one of the girls grabs a shovel and throws it at the other.This made twitter go crazy, with people adding background music to the vine, and coming up with creative collages. The vines popularity slowly decreased as Kermit the Frog grew. The meme became wildly famous on twitter and with every trend, peoples comedic side shined.

As July rolled around and the weather was heating up people started raising awareness for Amyotrophic Lateral Sclerosis a.k.a. ALS. The ALS Association started a worldwide challenge where you either dump a bucket of ice cold water on your self, or you donate money. Almost everyone took over the challenge, celebrities, students, even our principal Mr. Kenneth Pace. As of July 29th the ALS association raised $115 million in donations and also had some laughs while watching people dump ice cold water on themselves.

Throughout the month of September as school started, the buzz on Twitter was mostly about waking up early and homework, like every year. It wasn’t until late September early October when a new virus took over twitter. Ebola, something you probably know about, but something you don’t want to know too much about. Ebola is a rare and deadly disease caused by infection with a strain of Ebola virus. The 2014 Ebola epidemic is the largest in history, and affected  multiple countries in West Africa. The only thing on Twitter was information and comments about Ebola and the hash tag, #Ebola, was trending. Fortunately, Ebola didn’t get very far and the trend started to die down by Halloween.

Next on the list is starter packs, the best way to make someone angry or make your followers laugh. The phenomena started just out of the blue one night and became the most popular trend for teenagers. While adding humor, a starter pack is basically a description of a certain person in pictures. For example when describing a certain person you can add a picture of a sport they play, a celebrity they like, or even a clothing item they wear a lot.  The trend was not as nationwide as others, but it definitely left a mark on twitter.

One of 2014’s most popular term is “Relationship Goals.” Self explanatory this saying basically means that their relationship is your goal. This trend was seen in 2013 but never really was popular until this year, and now the saying is used towards almost every gesture or romantic thing someone sees.

Another popular term  that started to appear mid this year is “Turn Down For What.” The song released in December of last year and the saying started to rise to fame in January. The saying was used literally and sarcastically toward something that is fun. The song was even used in this years YouTube Rewind video. Even First Lady Michelle Obama got in on this trend when she vined a White House video spoof on the song to promote eating turnips as part of her healthy eating campaign.

The year was full of so many hilarious and relatable trends. While social media is still growing so does the humor in it.