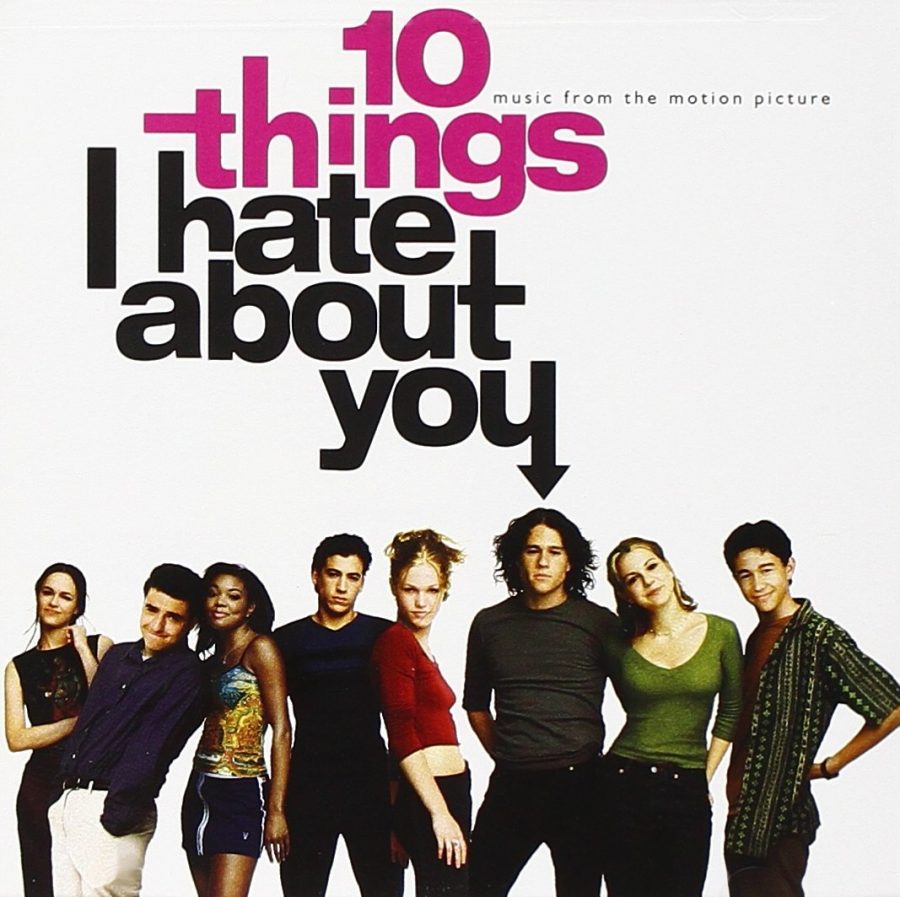 Up to their usually shenanigans, The cast of 10 Things I Hate About You don’t know what is in store for them.

10 Things I Hate About You is a romantic comedy staring Julia Stiles, Heath Ledger, Joseph Gordon-Levitt, and Larisa Oleynik. It is a modern adaptation of William Shakespeare’s comedy Taming of the Shrew.

The film debut in 1999 under the direction of Gil Junger. This was Junger’s first film, but he would later go on and direct films such as Black Knight and If Only. The screenplay was written by Karen McCaullah Lutz and Kristen Smith. They were able to take a literary masterpiece and make it into a modern romantic comedy for all ages.

New student Cameron James becomes love struck with popular sophomore Bianca Stratford. However, James doesn’t have a chance with Bianca because her father is strict when it comes to boys. Bianca’s father is a obstetrician who is worried about teenage pregnancy, so he won’t allow Bianca or her older sister Kat Stratford date. This doesn’t upset Kat because she is antisocial and is not interested in boys whatsoever. Bianca however doesn’t take the news lightly and tries to convince her father otherwise.

Their father comes up with the decision that the only way Bianca can date is if Kat dates. The problem with this is all the boys at Padua High School are afraid of Kat and her antics. James and his best friend Michael Eckman come up with the idea to set Kat up with bad boy Patrick Verona, so James can date Bianca. However, this is a challenge for all parties involved.

10 Thing I Hate About You is by far my favorite romantic comedy movie of all time. It has everything you would want in a movie and so much more. There are scenes that made me laugh, so hard I couldn’t breath and scenes that were so beautiful that made me cry.

One of the many reasons why I enjoy this movie so much is I find it relatable. As a high school student myself I understand the pressures that teens go through everyday. There are times that this movie gets a little extreme when it comes to these subjects, but I find that refreshing.

My favorite scene in the entire movie has to be the scene when Patrick sings Can’t Take My Eyes Off Of You by the four seasons. These scene takes place in the middle of the movie right after Patrick accidentally embarrasses Kat. To make Kat feel better, Patrick belts out this song in front of the girls soccer team along side the entire school’s marching band. This is by far the funniest scene in the entire movie and makes Patrick and Kat’s love for each other grow stronger.

I don’t really have to many complaints when it comes to this movie. I do think that at times the plot can become unrealistic, but I feel that fits with this movie.

One thing I would like to praise about this movie is the acting.  Majority of the characters in this movie were teenagers, but their acting was superb. I really thought that Heath Ledger and Julia Stiles were really young and in love. Along with that, I found Gordon-Levitt and Oleynik characters hilarious and I enjoyed the subplot of their love story.

Rotten Tomatoes awarded 10 Things I Hate About You 68%. I find these ratings reasonable, but I would give it a higher rating. Personally, I would rate this movie 80% because I feel this film is one of the best romantic comedy movies.

This movie is rated PG-13 due to crude sex-related humor and dialogue, alcohol and drug related scenes. I recommend anyone under the age of 13 to be accompanied by a parent or guardian.

Other than that, if you are trying to watch something funny, but romantic this Valentine’s Day, 10 Things I Hate About You is the perfect choice.