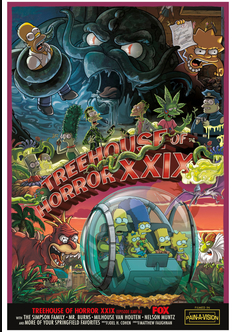 Photo Credit: photo via wikipedia under the creative commons license

Do Simpson’s still got it?, review of 29th installment of tree house of horror series

The first story is “Intrusion of the pod-y snatchers”. In this story, a group of plant aliens take over the bodies of the Simpsons characters and replace them with clones. When a character is replaced they are sent to the home planet of the plants, a utopian society with no technology. That is until Bart finds Mapple (Simpson’s version of apple) products under a living christmas tree.

The second story is “Multiplisa-ty”. Lisa kidnaps Bart and his friends. Lisa has gone insane and is going through many different personalities very quickly. It turns out the reason Lisa went insane is because Bart stole Lisa’s test and messed up her answers. Lisa was about to crush Bart to death with garbage until he talks Lisa out of it. Marge Simpson asks Lisa what happened and Lisa says “a lady just loses it sometimes.” although Marge says she doesn’t understand, it turns out she tied Homer in her trunk because he forgot their anniversary. Homer says “How was I suppose to know our anniversary fell on the day of our wedding.”

The last story is “Geriatric park”. In this story the Simpson family visits their grandpa in his new retirement home. In this retirement home they give all of the retiree’s dinosaur DNA to make them feel young again. Homer turns up the heat and it turns all of the old folks into dinosaurs. They find an escape bubble but get trapped in the mud. Lisa steps out of the bubble to talk to their grandpa. She tells him she wants to talk and hear his opinion on everything. It turns out the old folks just wanted to be listened to and cared about even as dinosaurs.

One of the common themes of all these stories is that they are all really good. They are a good mix of horror and humor. I’m not the biggest fan of scary movies, but I do want something that will put me in the Halloween spirit. If you’re looking for something scary with a sense of humor, the Simpsons tree house of horror series is the series for you. Not only that, they tell a good story as well that you will be entertained with.

If I had to pick one thing that I would’ve changed about this special is that I wish they made this longer. They either could’ve made the stories slightly longer or, in my opinion the better option add a few more stories to the special.