What rights have been violated? 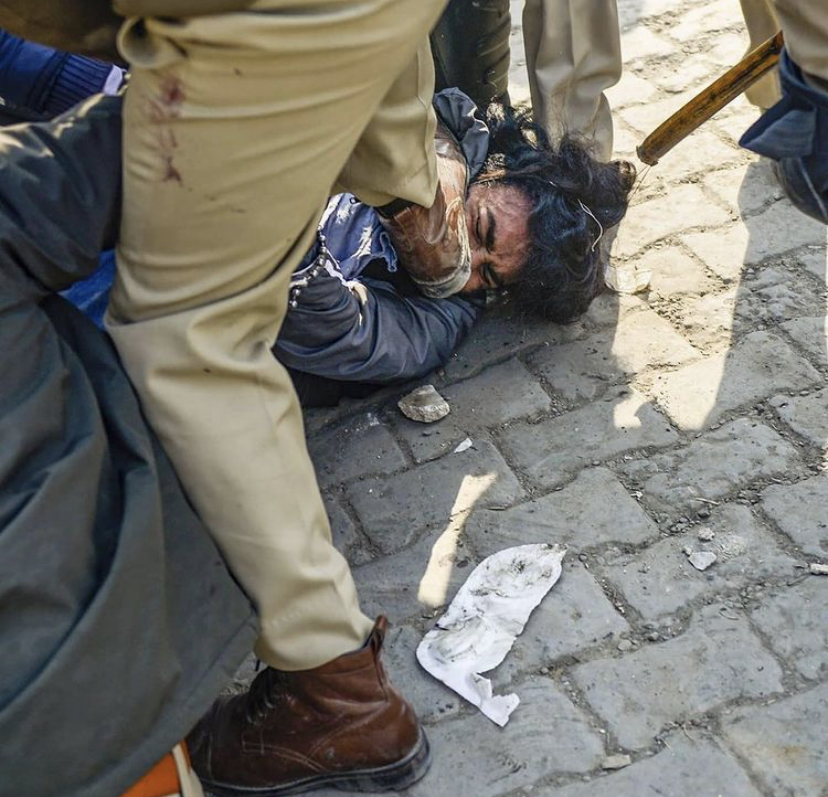 A Police Officer pinned down a protester named Ranjit Singh with his foot.

Firstly Indian police have been attacking peaceful protesters with tear gas, water cannons, and batons. This has caused many injuries to protestors and many have gone missing. Police have also shot a protester named Navreet Singh. Many eyewitnesses can confirm it, sadly he passed away. Godi (go-de) media is news media that supports Modi. This media puts out misleading information and lies to make kisaans (kis-ons) known as farmers look bad. For example Police attacked the farmers with tear gas. When kisaans threw the same tear gas shells at them, they got labeled as stone pelters by Godi media.

A journalist in India named Mandeep Punia made a video exposing Godi media. He showed how Godi Media photoshops pictures to make Indian police look good. He also goes and says how BJP workers ( Bharatiya Janata Party) tried to burn protesters’ blankets and mattresses along with trying to burn a tent full of ladies. The police arrested Mandeep Punia.

In the ICCPR (International Covenant on Civil and Political Rights) article 9 bullet 1 states, “Everyone has the right to liberty and security of person. No one shall be subjected to arbitrary arrest or detention.” However if you go down a little more to bullet 5 it says, “Anyone who has been the victim of unlawful arrest or detention shall have an enforceable right to compensation.” The Indian government is going against it’s own constitution. Mandeep Punia is not the only victim of unlawful arrest. Police have arrested a lot of farmers for no reason. Police also arrested Nodeep Kaur a trade union activist who has been supporting farmers.  They detained her about 30 days ago. Police have rejected her bail plea. Since then she has been physically, mentally and sexually abused by male police officers. Her sister confirms that there are wounds on Nodeep’s back and private parts.

Delhi police have released Mandeep Punia from jail. His statement to the public was, “I found many stories inside. Also spoke to farmers who were sent here and I will file the report soon.”