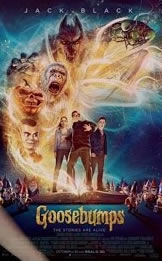 Photo Credit: Photo via i.ytimg under the Creative Commons License.

Zach and Hannah run away from the monsters as they are being chased.

Goosebumps was released on October 16, 2016. Goosebumps is a movie which was created from a book series called Goosebumps by R.L. Stine.

The movie is about a young boy Zach Cooper(Dylan Minnette) who is upset about moving to the big city from a small town. He finds a silver lining when he meets his beautiful neighbor Hannah(Odeya Rush). After knowing Hannah, he is surprised to find out that Hannah’s mysterious father is R.L. Stine (Jack Black). R.L. Stine is the author is the best-selling Goosebumps series. When Zach accidentally unleashes the monsters from the fantastic tales, it’s up to Stine, his daughter and Cooper to return the beasts back to the books where they belong.

Parents should know that Goosebumps is a live-action movie which is based on a middle-school level horror novels. Throughout the movie their are various kinds of monsters which could frighten young kids. Many of the scenes contain fighting, chasing and destruction. Some of the scenes also include a little bit of kissing and some references to twerking. The language is appropriate, the strongest word used was “butt.” The movie is PG so it is still lowbrow in tone, but it will appeal to people who prefer something scary.

In my thoughts, I enjoyed the movie. The film was produced in a very unique way and had very cool sets. The movie always had you on your  toes to know what is going to happen next. The effects of the movie were very well presented too. The production of the movie was really good it had a story to start off with and end with.