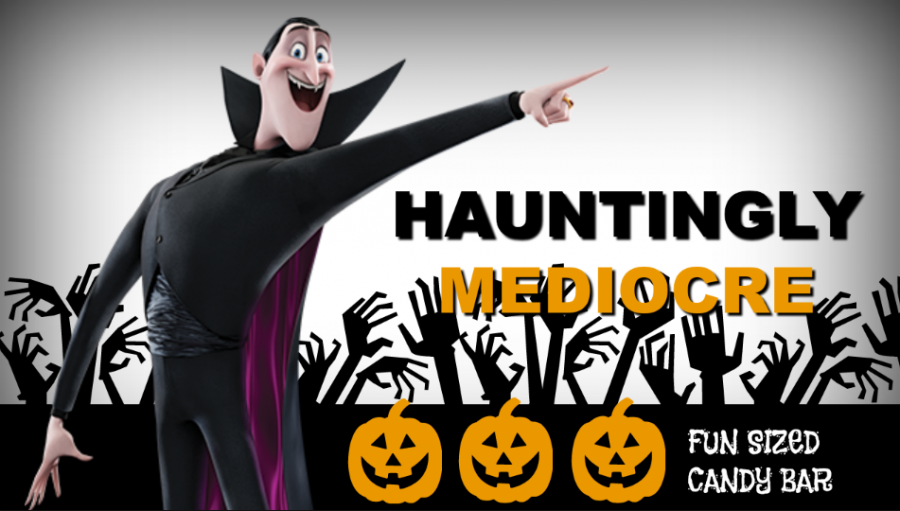 In this movie, Dracula runs a hotel for monsters. This is so that they’ll have protection from humans. Monsters in this movie consider humans to be dangerous. In this hotel lives his daughter, Mavis, who just wants to go out and explore the world. However, her overprotective dad refuses to let her out of the hotel.

On Mavis’s 118th birthday, the monsters in the hotel all plan a huge party for her. But Dracula’s plans take a turn when a 21-year-old human boy named Jonathan discovers the hotel. It’s up to Dracula to prevent Mavis from falling in love with Jonathan while not having the monsters discover who Jonathan truly is.

The animation in this film is a little basic. The color scheme is dark and dreary but the humor throughout the movie picks it up. The visuals within this movie are surprisingly creative. One scene that stuck out, in particular, was one towards the middle of the movie where Dracula and Jonathan were flying on tables. I thought the scene setup was very unique.

I like the variety of characters used within the film. This doesn’t just include the main ones, although I find Jonathan to be hilarious. There were some side characters that I really thought were entertaining. My favorites were the zombified versions of Beethoven and Mozart.

Even though the ending of the movie is predictable, the climax is something I personally didn’t expect. The movie does a good job of working up to the end of the movie.

Genndy Tartakovsky directed Hotel Transylvania. He previously directed Cartoon Network shows Dexter’s Laboratory and Samurai Jack. This film cost around $104 million to make, and it grossed $359 million at the box office. Hotel Transylvania won two awards. Adam Sandler won a Kid’s Choice Award for his voice acting. The other was a BMI Film Music Award for the best music in a film.

Critics had mixed thoughts about this film, but the general audience enjoyed it. Personally, I’d give this movie a 3 out of 5. For a movie meant for a younger audience, I thought the movie was entertaining. However, the jokes were a little cheesy for my liking, and I didn’t appreciate the movie using the song I’m Sexy and I Know it.